Fencing, art of attack and defense with a sword or similar weapon. Modern fencing is a recreational and competitive sport, but its rules and techniques are derived from those originally developed for efficient swordplay in dueling (see Duel).

Fencing is part of the Olympic Sport Programme since the first modern Olympic Games in Athens in 1896. It is a very popular sport worldwide. Speed and agility are the two key features of the sport. Two competitors fight swords or weapons called the FOIL, EPEE and SABRE on a six-feet by forty feet aluminium piste. Points are made through contact/ touch with an opponent, which is recorded electronically. The target area of contact/ touch is different for each weapon. There are both INDIVIDUAL and TEAM competitions and a team comprises of four fencers.

The foil is a light thrusting weapon (maximum weight 500 grams). The foil may target the torso (including the back), neck, and groin, but not the arms or legs. Touches are scored only with the tip; hits with the side of the blade do not count. 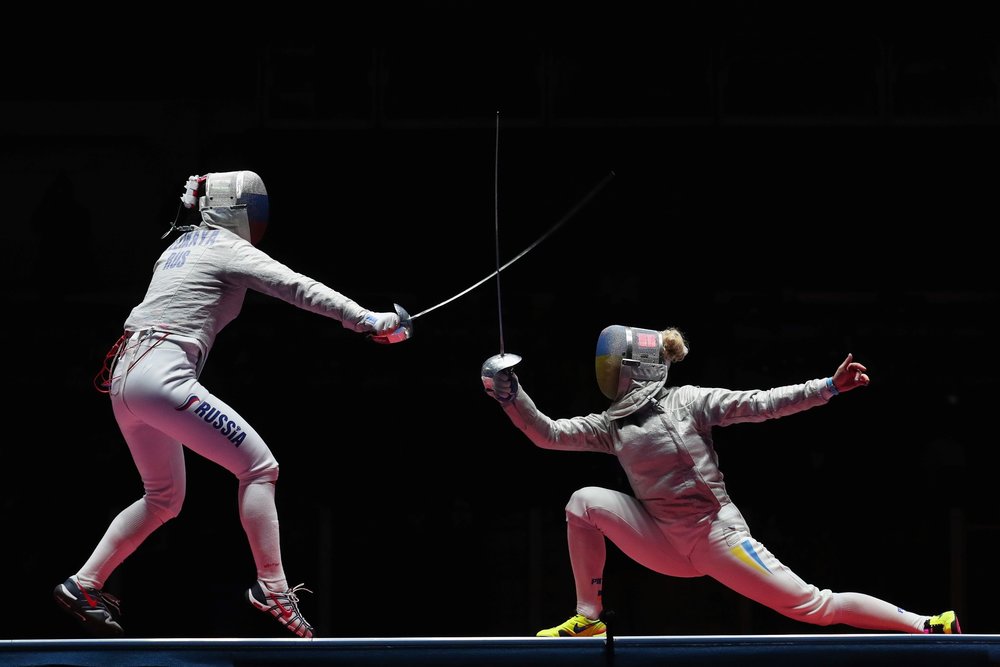 The epée is a thrusting weapon like the foil, but heavier (maximum weight 770 grams). In épée, the entire body is valid target. The sabre is a light cutting and thrusting weapon (maximum weight 500 grams). In sabre, the target is the entire body above the waist, except the weapon hand. The main object of a fencing bout (as an individual "GAME" is called) is to effectively score five points (in preliminary pool play) or 15 points (in direct elimination play) on your opponent before he/she scores that number on you. Each time a fencer scores a touch, he/ she gets a point. The preliminary pool matches consist of three minutes and direct elimination matches consist of three three-minute periods 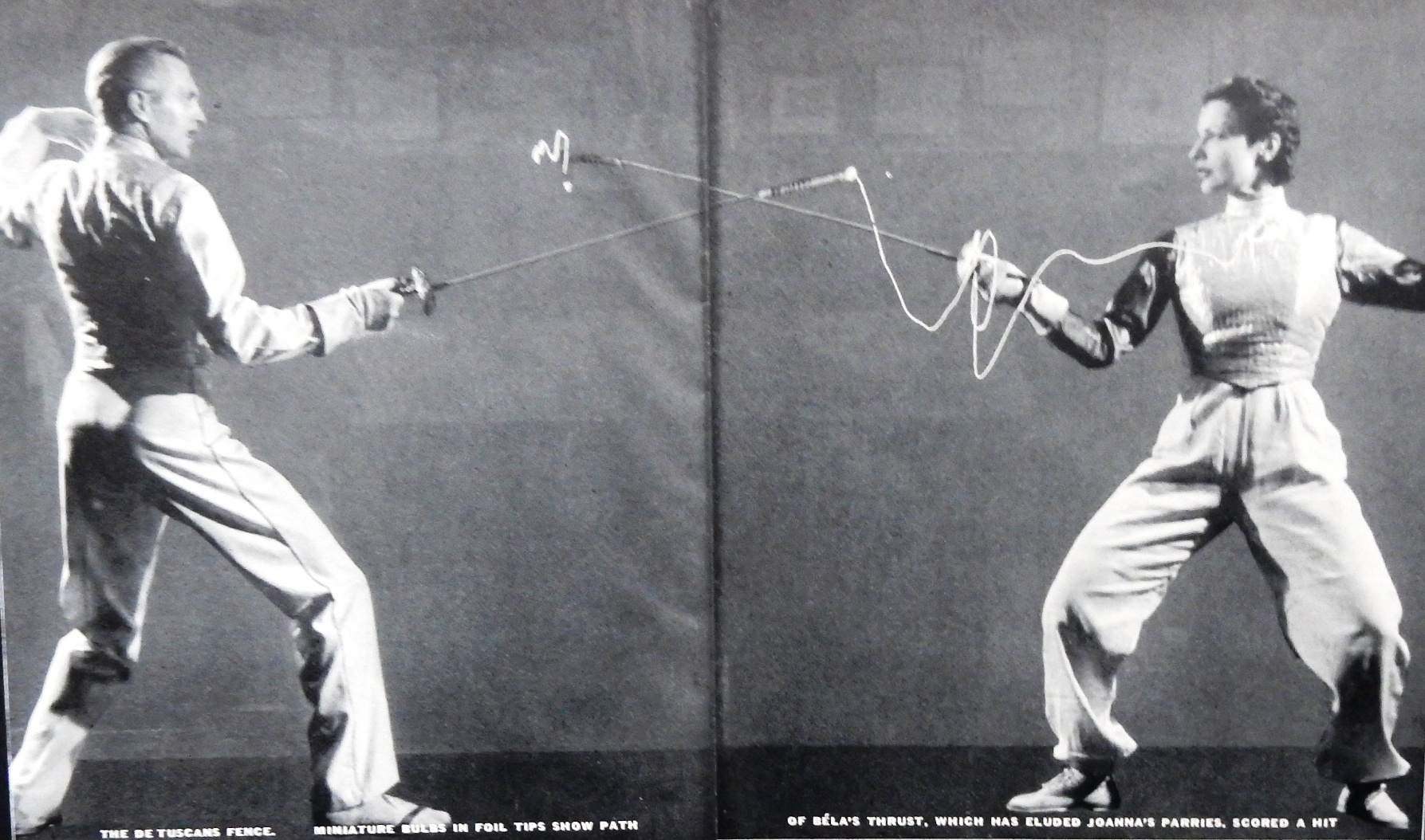 During the Middle Ages (5th century to 15th century) the sword was an offensive weapon used for cracking armor, and the shield was used as a defense. After gunpowder came into general use, heavy defensive armor became obsolete, and the sword became a defensive as well as an offensive weapon. In the 16th century the rapier was introduced in Italy, and the art of fencing was rapidly systematized in fencing schools. A dagger in the other hand, and later a folded cloak, replaced the shield. Eventually the non sword arm was left free and held away from the sword arm to minimize the target area. The use of the rapier and the Italian fencing technique spread throughout Europe. In France and England, the size and shape of the rapier were constantly modified because its length and weight made it clumsy to carry. During the 18th century the small sword, or epee, was invented and popularized in France; the new weapon resulted in distinct Italian and French styles of fencing. The Italians used the rapier in a bravura manner, with pronounced, vigorous gestures. The French used the epee in a more formal manner, with great restraint of movement. The French style of fencing became by far the more prominent. Its rules govern most modern competition, and the vocabulary of traditional fencing is composed largely of French words. In the 19th century dueling was generally outlawed, and the fencing schools turned to teaching fencing for purposes of sport. Much of the equipment still used by fencers was developed at this time, including the glove worn on the sword hand, the plastron (chest protector), and the mask of wire netting.

Three weapons are used in the modern sport of fencing: foil, epee, and sabre. The blades of these weapons are made of tempered steel, and each has a maximum blade length of about 89 cm (35 in); the maximum weight of foil and sabre is about 500 g (about 17.6 oz), that of epee about 770 g (about 27.2 oz). Developed originally as a practice and sporting weapon, the foil is light and flexible and is considered the basic weapon.

Its use is generally taught to all beginning fencers. Touches are scored by thrusting with the blunted point; the blade is rectangular in cross section. The modern epee is descended from the French small sword. Like the foil it is a thrusting weapon, but has a larger bell, or hand guard, and is heavier and more rigid in construction. Handles, or grips, for foil and epee vary and are chosen according to individual preference. They include the French grip, slightly curved and with a pommel at the end; the Italian grip, which has a crossbar and is used with a wrist strap; and various pronged handles gripped much like a pistol. The modern Sabre is derived from the weapon formerly used by cavalrymen. It has a protective, scoop-shaped hand guard that curves under the hand and, like the epee, a blade roughly triangular in cross section. Touches are scored by thrusting with the weapon or, chiefly, by cutting in a slashing motion with the edge of the blade.

Tactics vary among the three weapons, but certain fundamental techniques are common to all. Motions of attack and defense are initiated from the basic on-guard position, a crouch assumed with both knees flexed, the rear arm crooked upward, and the sword arm partially extended toward the opponent. The basic attacking action is the lunge, executed by stabbing with the sword arm at the target and thrusting forward on the front leg. The attack is successful if a touch is scored on the valid target area. In foil fencing, only touches on the torso are counted. In epee competition the entire body, head to foot, is a valid target. In Sabre fencing the valid target is the part of the body above an imaginary line, called the saddle line, drawn across the top of the hips (this includes the head, arms, and torso).A movement of the blade designed to block an attack is called a parry. Fencing has eight principal parries, designated by the Old French ordinal numbers: prime, seconde, tierce, quarte, quinte, sixte, septime, and octave. Each parry is designed to protect a different part of the target against attack. A riposte is the return thrust made immediately following a parry.The fencer who takes the offensive may employ different kinds of attacks to circumvent the various parries used by an opponent. A simple attack is made with one motion—that is, a cut or thrust of the blade—and is intended to hit the target before the defender can parry. A compound attack involves two or more blade movements. The initial movements are feints, designed to mislead the opponent into parrying in a direction other than that in which the attack finally develops. Other techniques, such as beating or pressing the opponent’s blade aside, may be used to create an opening for an attack. A running attack, or fleche, may be used to catch an opponent by surprise. A competitor under attack may also resort to a stop-thrust, a sudden counterattack made by thrusting without lunging.Bouts are conducted on a strip approximately 1.5 to 2 m (4.9 to 6.6 ft) wide and 14 m (46 ft) long. The first fencer to score five touches wins a bout. In formal competition the weapons are wired and connected to an electrical scoring apparatus, so that when a touch is scored a light flashes on the sidelines signaling the touch. These electrical weapons were instituted to facilitate the exacting scoring of bouts. Foil and sabre competitions are based on complicated right-of-way rules regarding mutual touches, whereas in épée competitions only the timing of the touch is considered. Bouts are judged by a referee who applies the right-of-way rules and awards the touches with the aid of the scoring apparatus.

Fencing has been one of the events in the Olympic Games since 1896, and epee fencing is one of the five events in the modern pentathlon. International competitions are sanctioned by the Federation International D’Escrime (International Federation of Fencing), the world governing body of the sport. A world championship is held annually to determine individual and team champions of each weapon. In the United States, competitions are organized on a local, regional, and national basis by the U.S. Fencing Association, formerly known as the Amateur Fencers League of America (founded in 1891). Competitions on the collegiate level are held under the auspices of the National Collegiate Athletic Association (NCAA).